"Wake Me Up ", super energetic punk-rock song by The Buddha Pests
spotted on 2 new big playlists ! Click below !

"Wake Me Up ", great punk-rock song by The Buddha Pests
spotted on 4 new big playlists ! Click below !

The new psychedelic rock-country & shoegaze masterpiece"Chunka "
by TexMex Shaman has been spotted by playlist curators
and you're very welcome to check them below !

"Wake Me Up ", alt punk-rock song by The Buddha Pests, is now placed in 2 new awesome playlists. Check them below ! Make your choice between :

"Wake Me Up ", punk rock song of the pure style by The Buddha Pests (from London) placed in a new playlists ! Click on the left column to listen to the song (ranked 68th) at "The best of week!" or on the right column at "Punk Rock in Exile" (song ranked 13th)

"I was about to make the final version of "Chunka " and then I fell asleep at night with my guitar in my hands and had a dream about the exact part I was working on. I woke up and started recording the 3rd section as if it were already written ! "

"Chunka " is a major psychedelic rock and shoegaze track by TexMex Shaman with almost 7320 views on YT (in only 20 days !!)

You can stream "Chunka " now by clicking on the smart links on the right !

Phoenix Records · Wake Me Up by The Buddha Pests

"Wake Me Up" is already a great punk-rock song by The Buddha Pests from London and with the help of every of you this great energetic song with awesome drums and guitars and killer lyrics will become a hit of the genre.

Click on the left link to stream "Wake Me Up" (rank 43th now) in the playlist "adventures in post-punk" (by AnalogueTrash), especially as the song is in very good company with such names like The Fall, The Cramps, Fugazi and so on !

With "The best of week!" (by MTView Zine) you can stream "Newly ", psychedelic electro-rock single by TexMex Shaman, from a new 8th playlist !

"Vimana ", last fantastic psychedelic alt country rock by TexMex Shaman from Dallas, is now in the big playlist "Screaming Hearts" (by Rocky) with some famous names like Deftones, Korn or Papa Roach !

You can also listen to "Vimana " directly on spotify at...

A 7th important playlist "Contemporary Wave 80" by the taste maker Newpop has welcome "Newly ", psychedelic electro-rock single by TexMex Shaman that you can stream by simply checking these playlists on the left !
Scroll a bit to find the track at the 23th position now

"Fresh Discovery" by Music Lover and "DISCOVERYS" by Fabian are the 2 new big playlists of the day having placed "Newly ", psychedelic electro-rock single by TexMex Shaman that you can stream by simply checking these playlists on the right !

Great result for "Newly " by TexMex Shaman that has just been placed in 2 new playlists : "Enter the world of Psychedelia" by Beat Buzz News and "Songs to be chill" by Francisco Ruiz.

The 2 playlists are on the left so feel free to check them and stream the amazing psychedelic electro country rock "Newly" !

Listen on the right The Buddha Pests song "Temporal Abyss " in the very big Sandvitchus tastemaker's playlist (1261 tracks !) "Stoner Rock & Psychedelic Space Rock".
Like any new song added in his playlist "Temporal Abyss " was added at the bottom and you will have to scroll (!) but this fantastic song will move up the positions !

But you know what ? You can NOW listen to "Temporal Abyss " on Spotify at...

and also on Soundcoud at...

Having also moved up 33 positions (among more than 267.470 other tracks !!) to reach rank 67th at the General Rock Chart, it's now a renowed new Rock track.

"Vimana " in the TOP 10 of the SoundClick's International Psychedelic Rock Chart !!!

Click below to Listen now to "Vimana " at Spotify !

Listen on the right TexMex Shaman's song "Newly " in the JPGChief's tastemaker's playlist "Less Than 1,000 Followers!"."Newly " was added on 11th rank among almost 310 songs !

Listen on the left TexMex Shaman's song "Newly " in the Andrea Pizzo's music fan's playlist "Soundtrack@PurpleMice".
"Newly " was added on top among some of the greatest names of the genre like Hans Zimmer, Vangelis, Lisa Gerrard, Mike Oldfield, Nick Cave, Jean-Michel Jarre, Queen, David Bowie or The Alan Parsons Project ! 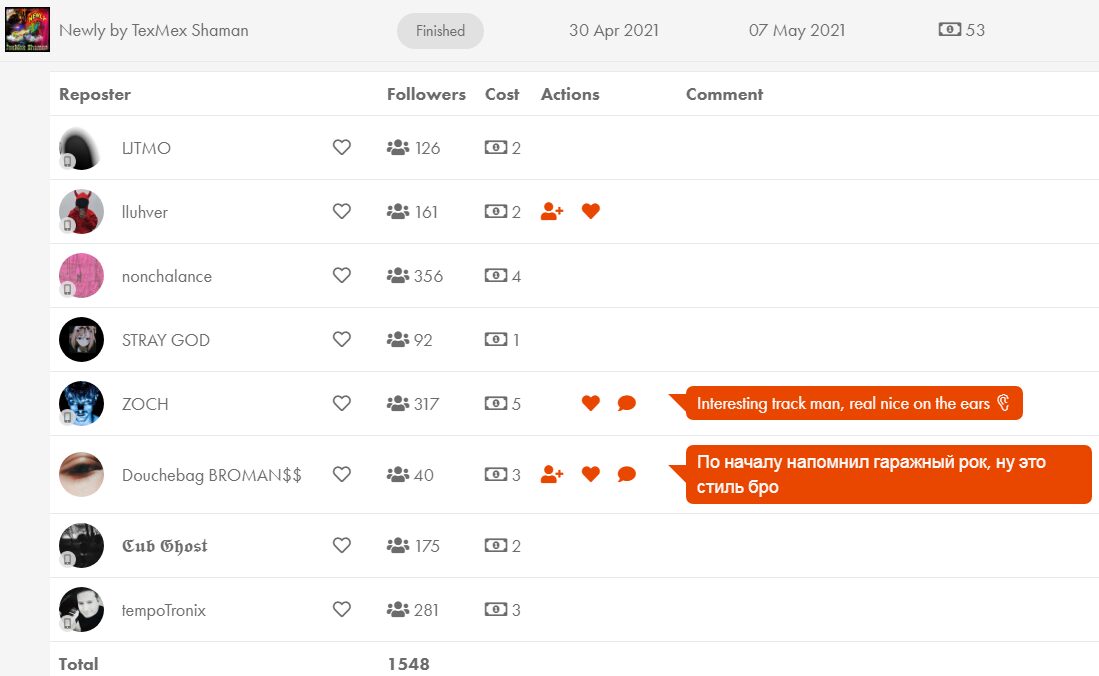 BACK TO THE TOP !